The Walking Dead Season 3 Contribute to This Page Video 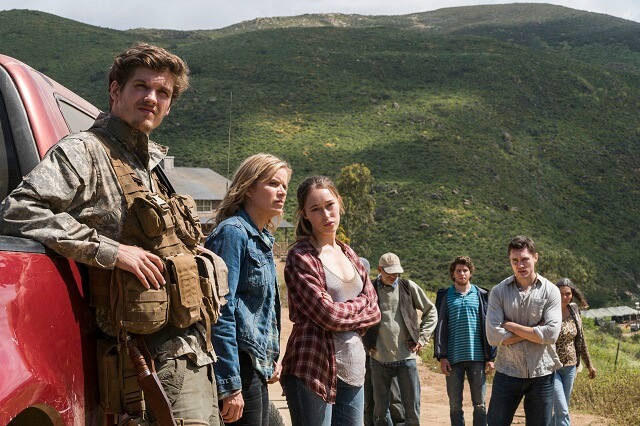 Merle tries to force information out of Glenn. S3, Ep8. Rick, Daryl, Michonne and Oscar enter Woodbury in search of Glenn and Maggie.

Meanwhile, a new group of survivors encounter the prison. S3, Ep9. Woodbury is left in disarray following the attack by Rick's group.

Merle's presence in the group causes conflict. S3, Ep Rick continues to see visions of Lori. The Governor plans an assault on the prison.

Daryl and Merle fend for themselves out in the forest. As Rick and the group debate their next course of action, Andrea tries to negotiate with them.

The Ruger Mini is seen in "Welcome to the Tombs" S3E At the end of "Ain't a Judas" S03E11 , a Woodbury Guard can be seen holding a SKS fitted with a scope and an ATI Fiberforce "Dragunov" stock.

The Governor opens fire with a Steyr AUG A1 in "Home" S3E10 , hitting one of the prison survivors in the head an impressive shot, considering it was done at a long distance with a 1.

Despite his right eye being useless, he still fires right-handed instead of left. The weapon is likely meant to be a full-auto conversion of an AUG SA, a semi-automatic variant of the A1 which was imported to the US for civilian use before being banned in Fully-automatic AUGs are extremely rare in the United States, as unlike the M4A1 they are not military issue and are not used by any law enforcement entities apart from US Customs and Immigration Enforcement.

The civilian variant of the AUG is the STG which has a different design than the A1. He later uses the rifle in "Welcome to the Tombs" S3E Allen Daniel Thomas Ray can be seen carrying a M14 in "Prey" S3E A Woodbury soldier can be seen carrying the same rifle at the episode's beginning.

Roger Mitchell holds a AR Sasha is seen wielding one when Rick and the others go to Woodbury with Karen. An IMI Uzi is seen in the hands of both Merle Michael Rooker and Maggie Lauren Cohan in "Made to Suffer" S3E It is then seen again in "Welcome To The Tombs" S3E In "Made to Suffer" S3E08 , a Woodbury survivor named Haley Alexa Nikolas carries a suppressed Micro Uzi when Rick and his group come to save Maggie and Glenn.

After the guard dies, Andrea Laurie Holden picks up the weapon in the same episode. A survivor named Ben Tyler Chase also is seen with this weapon in "This Sorrowful Life" S3E In "Made to Suffer" S03E08 , a Woodbury guard can be seen using a Beretta Cx4 Storm.

The SMG is also seen in "Home" S3E The shotgun that used to be carried by Shane Jon Bernthal in Season 2 appears again in Season 3 as Rick is seen carrying it in "When the Dead Come Knocking" S3E In the same episode, Oscar Vincent Ward is shown loading it along with several other weapons into a car.

A young Woodbury soldier named Jody holds up his Remington when in a confrontation with Carl in the Season 3's finale "Welcome to the Tombs" S3E A Remington Field Gun shotgun makes a appearance in Season 3 as the Governor is seen taking it out of the bag of guns in "The Suicide King" S3E In "When the Dead Come Knocking" S3E07 , Rick and the rest of the survivors confront a crazed hermit wielding a 12 Gauge Double Barreled Shotgun.

Strangely, the sound effect of a pump action shotgun is heard when he aims it at Rick, despite this firearm not having such an action.

An Ithaca 37 is seen briefly held by a Woodbury guard who beats up Merle in "This Sorrowful Life" S3E A Browning M2HB machine gun is mounted on a National Guard HMMWV that the Governor brings back to Woodbury in "Walk With Me" S3E It appears to be a mockup identical to the one was fitted on the fake M1 Abrams tank in Season 1.

The heavy machine gun is later seen again in "Prey" S3E14 being removed from storage and mounted on the HMMWV to be used as a mock technical by the Woodbury army.

The Browning here is an actual machine gun as Bowman opens fire on walkers with it in the Season 3 finale "Welcome to the Tombs" S3E When Allen attempts to fire the machine gun, it appears to have jammed and is thus abandoned.

A Browning MA4 machine gun can be seen mounted on the wall at Woodbury in "I Ain't A Judas" S3E This machine gun is seen manned by Caesar Martinez Jose Pablo Cantillo when a car pulls up to the wall later in the episode.

Daryl Dixon Norman Reedus carries a Horton Scout HD crossbow as his weapon of choice for the first half of Season 3. Shumpert, the Bowman, is seen holding it in the mid season finale "Made to Suffer" S3E08 after Daryl is captured in Woodbury.

Michonne picks up a Stryker Strykezone crossbow in "Clear" S03E12 from Morgan's weapons stockpile. She later gives it to Daryl Dixon.

Daryl then switches his Horton Scout HD for the Strykezone , and uses it as his main weapon for the remainder of the season.

He is most notably seen using it in "Arrow on the Doorpost" S3E The DefTech 37mm launcher fitted with an ELCAN sight is used by Martinez to destroy a guard tower in "Welcome to the Tombs" S3E In "Walk With Me" S3E03 , a Georgia Army National Guard soldier is armed with an M4A1 affixed with a M grenade launcher when he is shot by ambushers from Woodbury.

In a deleted scene, Martinez is seen using an M AT4 to destroy one of the prison guard towers in "Welcome to the Tombs" S3E Rick's bag of guns is seen once again in "The Suicide King" S3E09 as the Governor inspects the guns still left in it.

In "Clear" S3E12 , Rick, Carl, and Michonne discover the massive amount of arms gathered by Morgan Jones Lennie James in his hideout.

In "Arrow on the Doorpost" S03E13 , the weapons taken from Morgan's arsenal are laid out on a table.